The legendary Aosta-Becca di Nona ran today on Sunday, July 15th, on a spectacular day for climate and popular participation. Reborn in 2016 thanksatCharvensod, to the passion of a group of friends, the’Becca Sports Association of Ninth 3142,support of 360 volunteers deployed on the route,has in Laurent Chuc and Loris Carrara the soul and heart of an organizational machine that has brought a thousand runners on the trails of the Becca di Nona, starting from Chanoux Square in Aosta.

A ritual, a feast,in addition to a race, which is renewed every two years, and the two-year period withwhere you organizethe second life of this race is also one of the reasonsfor incredible popular participation. Not only Aosta-Becca di Nona, which means running and walking 13 km to overcome the 2562 meters of altitude that lead to the summit, but also Aosta-Comboè, intermediate finish of 9 km and 1500 meters of ascent, which would already be a tough race of its own, if it did not shrink to the comparison with the comparison with the “Becca”. This year, the novelty of the “La Montée des Gourmands”, non-competitive food and wine walk of 9km and 1500m D,where the“Gourmands” they tasted someamong the best products of the territory accompanied by the music of the folk groups.

Phiring to the competitive news,It should be noted that in addition to the record of participation in the 3 races of 1050 runners, the new records are set on all 2 courses, the Aosta-Becca di Nona and the Aosta-Comboé, both male and female (although the 2h14m22s Elisa Brocard of 2009 remains undefeated, with a different pass in the Comboé Valley).

Starting 1000 runners from Chanoux Square meant distributing them in grids, so that everyone could cross the underpass of the railway without too much slowdown, and here too the organization succeeded in the work as for the rest of the race.

Leading from the start, which looked like the Olympic 100-meter final more than a 2500-meter skyrace, Nadir Maguet of the Army Sports Centrethat gradually increased the detachment from the direct pursuers,going to touch the madonnina at the top of the Becca di Nona with the amazing time of 1h50'58”, a new race and ascent record from Aosta to The Ninth Becca. Second place for the 2016 winner, Massimo Farcoz still author of a great test in 1h57'51”, while fabio Pasini, the main protagonist of cross-country skiing, climbs on the third step of the podium. Swiss emanuel Vaudan rounded out the top tenDanilo Brambilla, Denis Trento, Pierre-Yves Oddone, Guido Rovedatti, Alex Dejanaz and Matteo Giglio.

Switzerland's Maya Chollet won in the women's race in 2:22:30”, a recent protagonist at the World Long-Distance Mountain Racing Championships,triathlete and journalist, which sets the new record of the women's course, although with the distinction made previously. Second place for the 2016 winner, Chiara Giovando, who improves her time by two years ago, but with 2:25:18” you have to settle for the square of honour. And from the Canavese comes also the third, the Polish Katarzyna Kuzminska, who in 2h27’07” climbs to the third step of the podium, followed by Barbara Cravello 4in Christiane Nex 5in . Paolo Riva and Maria Giovanna Cavalli won the Master50 category.

NDennis Brunod's expert strength has the upper hand over the young lions of cross-country skiing, as the Under20 national team retired in La Thuile participated in the suit,like the young people of Asiva, with his coach, a legend of blue cross-country skiing with 4 Olympic medals and two World titles: PietrOr Piller Cottrer.Dennis BrunodMont Avic,wins with the new course record of 1h09‘44″“, followed by Didier Abram 2nd in 1h15‘21“, third ex-aequo Didier and Jacques Chanoine in 1h15‘59” 5th Andrea Gradizzi.

In 2016 she had not raced the Aosta-Becca di Nona because she was at the Rio Olympics in the triathlon, but this year, despite coming back from an injury since she was hit by a bicycle, Charlotte BoninAthletics Calvesi, triumphed at Comboè in 1h20‘34“, also for her new course record, followed on the podium by Chiara Pino 2in in 1h33‘04” Jessica Gerard 3in in 1h35‘15“.

Dennis Brunod (Aosta-Comboé): “Congratulations to the organizers, race organized very well and with a participation never seen before on a Vertical. I have some ailments due to the last races, but despite the pace of the young opponents at the start, on the steep I took my step and I'm happy so.”

Charlotte Bonin (Aosta-Comboé): “I am happy with this success, despite the injury of the bicycle accident a few weeks ago. After the Triathlon Olympics I was able to dedicate myself to my other passions and running in my mountains is really nice.”

Nadir Maguet (Aosta-Becca di Nona): “It was a beautiful day for me on the Becca. Two years ago I had not gone the way I wanted, this year I redeemed myself, I won and made the record. The organizers deserve it and Laurent Chuc who has set up an event organized very well and with a bang of people.”

Maya Chollet (Aosta-Becca di Nona): “It was the first time I ran in the Aosta Valley and I have to say that we Swiss have to learn from a race like this, from the course, from the people's cheering, from the laughter, congratulations to all the organizers.”

The comment of organizer Laurent Chuc, deputy mayor of Charvensod: “We put all our effort into making a legendary race like the Aosta-Becca di Nona become a great national and international event. Thanks to all those who helped us, thanks to the 360 volunteers and a thank you to all of you who have raced. Long live the sport, live the Becca!” 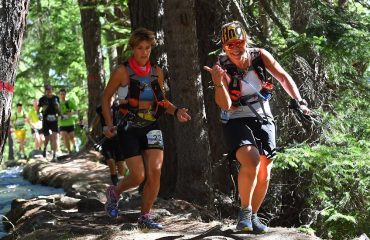 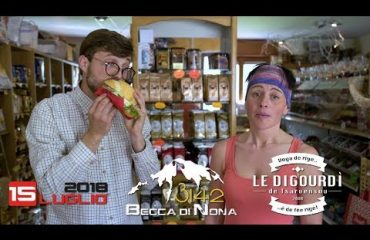